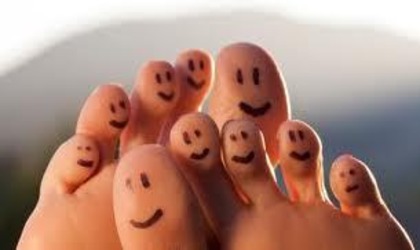 “After sustaining a foot injury, Lee assessed my problem and made me a pair of sports orthotics, which lifted the pressure and relieved the pain in my foot, which enabled me to continue light training while I recovered from my injury, which helped keep my fitness levels up and that made it easier to get match fit and return to the game after my injury had healed”.

Just wanted to drop you a line to let you know that the pads you fitted into my dancing shoes are great! And they’ve given me a new lease of life.
I’ll get back to you soon, as I’m going to need these fitted in a lot more shoes.
MANY THANKS!
Pat”

“My daughter Jane (9 years old) was in a lot of pain, her feet and ankles were turning inwards, she was having trouble walking, running and even standing for a short period was painful for her. Because of the pain Jane had stopped taking part in sporting activities at school, so I contacted Mr Thorlby and he came to see Jane, he examined her feet and ankles, watched her walk, he advised me that Jane needed orthotics, I didn’t know what orthotics were but Mr Thorlby explained everything to me and I agreed to get the othotics made for Jane. Mr Thorlby took lots of measurements and moulds of her feet and made Jane a pair of orthotics and once Jane had got used to her orthotics, using the instructions that came with them, she was back to her normal self, walking, running and playing without any pain”

Just a note to say thanks and let you know the ankle and leg pain has now gone and I’m back using the gym again.
Thanks again
J

“For over 12 years I had been having orthopaedic shoes made for me by a company in London, but having just retired I could no longer afford them so I looked for an alternative and came across the Herts Orthotic Specialist website, where I read about orthotic friendly shoes. I called the Herts Orthotic Specialist and spoke to Lee who explained about orthotics friendly shoes and gave me the details of suppliers, I found a shop selling the shoes that was not to far away and brought a pair of shoes and a pair of boots. I made an appointment for Lee to come round and do an assessment of my feet, during the assessment, while watching me walk in my new shoes and boots, lee advised me that he could make me a set of orthotics to replace the insoles that were already in the shoes, that would support my feet and said that they would do the same job as my orthopaedic shoes, After my orthotics were made and fitted into my new shoes they were not only as good as my orthopaedic shoes, they were far more comfortable and the orthotics could be swapped into my new boots as well, I can now choose from a large variety of footwear that I can fit my orthotics into at a fraction of the cost of having orthopaedic shoes made and its all thanks to Lee”.

just to let you know the orthotics are great, the pains gone and I’m back playing football again and using the gym.
Thanks for all your help.
Mark

Just a quick email to let you know that I bought some new walking shoes and neutral trainers  as you advised and have been using my new orthotics for about a week now.
Oh my goodness – such an amazing improvement to my posture and no pain at all in my feet and knees.  The discomfort has totally evaporated and I’m walking tall again ;))
Just wanted to say thank you so much for all your excellent advice and also for wonderful craftsmanship.
I’m a very satisfied and grateful customer and am recommending you to other friends too.
Thanks again
Kind and grateful regards